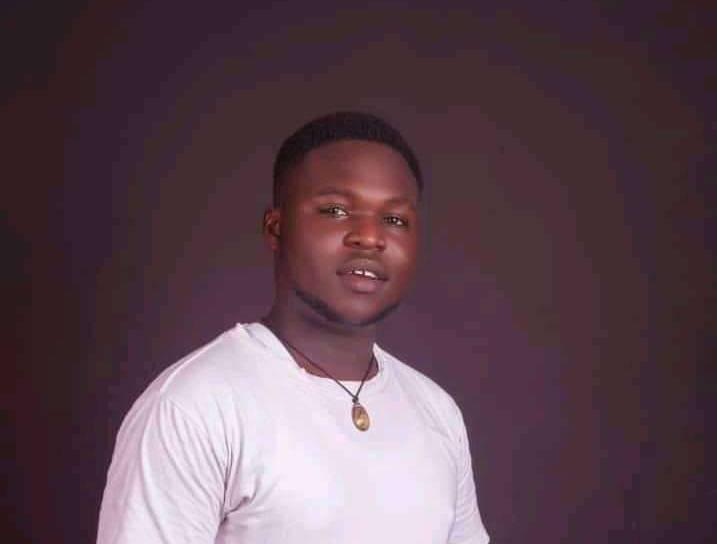 The Nigerian music industry is currently booming world wide. Afro beats has taken over every nook and cranny.

The Likes of Wizkid, Burna Boy, Davido, Olamide, Kizz Daniel, Rema, Ckay, Patoranking, Fireboy, Asake, Ruger, Tiwa Savage, P Square, Ayra Starr, Buju, Mayorkun, Niniola, Zlatan, Portable, Zinoleesky, Bella Shmurda and so many others too numerous to mention are representing globally. This is the best time to be an African because these music stars are putting the continent out there, positively.

Asake recently sold his 02 Academy show as his tickets were exhausted within two minutes, leaving behind a trail of mixed reactions. He had to come out to apologize to his fans for underestimating the love they had for him. Burna Boy is currently performing in different parts of the world to the delight of fans. His pen game is so magical and it shows how he has really prepared and mastered his craft over the years. Wizkid on the other hand is steady representing as he keeps making history. Akon in a live interview commended the efforts of Wizkid, Davido, Burna Boy and Mr Eazi.

Omah lay recently collaborated with Justin Bieber who is a global star. This sky rocked Omah Lay’s status on a higher level. Omah Lay has been selling out different venues in different parts of the world. His songs are trending on top charts.

Recently, while Usher was performing in Ghana at the Global Citizen Festival, he brought the likes of Tems, Oxlade, Pheelz and Tiwa Savage to perform with him. The fans kept singing to their songs leaving Usher in awe. This goes to show how the African music industry is global.

Music producers like Pheelz,Young John, Olakira and so many more delved into music and they are doing well.

Fireboy DML has also set a new milestone on the Billboard charts with his hit song “Peru” which features Ed Sheeran. Aside from breaking and setting the records on the UK Charts, Fireboy DML has joined the elite of Nigerian musicians to debut on the hot 100 charts with his chart topping record “Peru” which features the grammy award winner, Ed Sheeran. Fireboy DML has gone to become a global star with his numerous hit songs too numerous to mention. His Pen game is so out of this world and it is above his age. He is the first Afrobeats artist to perform at the BET Awards. This has gone to show that Afrobeats is here to stay. This is definitely the right time for any talented Benue artist to tap into the afrobeats explode. 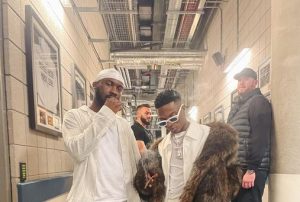 Austin Iornongu Iwar professionally known as Tay Iwar is a very talented Nigerian artist from Benue state. He is the only Nigerian artist featured on Omah Lay’s latest Album tagged Boy Alone on the song titled Tell Everybody. In 2020, he featured on Wizkid’s Made in Lagos album, on “True Love”, with Projexx. In 2021, following the release of the deluxe version, on 27th of August 2021, he co-wrote “Steady” from the deluxe version, which earned him his first nomination at the 64th Annual Grammy Awards, for Best Global Music Album. Same year, he co-wrote “System” for Dave, from We’re All Alone in This Together studio album and was featured on Tiwa Savage’s Water & Garri EP on “Special Kinda”. On the 1st of December 2021, Tay Iwar performed “True Love” with Wizkid for the first time at Made in Lagos Tour in London at The O2 Arena. On the 14th of January 2022, he signed a worldwide publishing deal with Warner Chappell Music, through a joint venture with The Flight Club. On 29th of March 2022, Wizkid released the music video for “True Love”, featuring Tay Iwar, and Projexx. “True Love” was directed by Nabil Elderkin, and starring Jamaican-Canadian model Winnie Harlow and Wizkid. He has been trying all his best but he needs more support from Benue people and middle belt at large to continue to strive in the competitive entertainment industry. 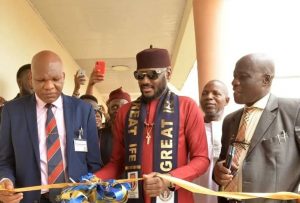 When you come to Benue state, aside from 2baba, there has not been another reputable star that has risen to his level. Some artist from these region are talented but they seem to find it very difficult in breaking into the ever competitive music industry. Artists from different parts of the country constantly keep breaking into the music industry except Benue state. This prompted a music executive Ricky Nice to make a post advising Benue artist. He made it very clear that so many Benue artist are forcing themselves on music. There is one thing they need to understand in Life, you cannot give what you don’t have. Some are trying but some needs to quit music and try other businesses like farming, cryptocurrency, blogging, real estate investment, transportation, oil and gas, on air personalities, Djs, Photographers, Video directors, Show organizers, fishing, building and construction and so many more too numerous to mention. They can even establish record labels and sign young talents. Music is not for everyone. Checkout his post below: 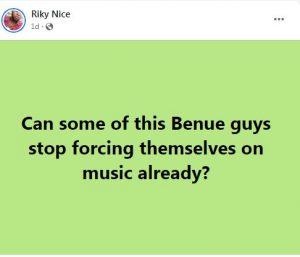