In a distinguished community development career spanning for five years, Onwe Zacks Onyebuchi transformative leadership has created so many positive impacts in his immediate Ntezi community and Ebonyi state as well. He often describe himself as a serial volunteer, loudspeaker, community development/quality education and Gender based violence advocate.
Onwe Zacks Onyebuchi is the founder Ntezi People’s Forum, a community based organization founded for the sole aim of improving child education and community development in Ntezi, Ishielu Local government of Ebonyi state by demanding accountability from political office holders in the community.
He is a graduate of Zoology from the prestigious Federal University of Agriculture, Makurdi now known as Joseph Sarwan University, Makurdi. As a student, Zacks served as the president, National Association of Ebonyi state students (NAESS) Federal University of Agriculture, Makurdi Chapter, from 2016-2018 and also the secretary of the Moderator, Federation of Igbo Students, 2018-2019.
Onwe Zack Onyebuchi is an avid writer and a social media influencer, writing basically articles that spur people to take actions towards a better community and also motivating young people to maximize their potentials. 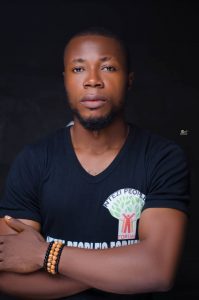 He was born in Ntezi, an agrarian community in Ishielu Local government of Ebonyi state in 1992. Growing up, singing was one of his hobbies but due to financial demand in the music industry, he left the music career so as to be able to focus on his education having been brought up from a poor background. In 2018, he released a single he titled *The One* to prove to the world that he is still in the music space. Through his community initiatives, he has empowered more than twenty five children in the last three years to remain in school and also provided portable drinking water for two villages in Ntezi. He is currently an associate producer of _TalkingHealthWithDrLaz_ , a health weekly talk show that airs on African Independent Television (AIT) and also pursuing a career in health journalism.