Od Woods and Atela set to release “Today” video off the Ikonic album.

Od Woods with real name Ikon Orduen is one artist that has stood the test of time over the years as far as music entertainment in Nigeria is concerned.

Od Woods has written his name on the sands of time and he will be remembered as one of the pioneers that paved way for other generations to strive on. He is smart and hard-working, he knows what he wants and he knows how to get it done. He is a role model to a lot of people around the world and he built all these with tears and blood. He deserves every flower given to him.

His album titled Ikonic is one of the best any artist has released. It contains hit songs that will stand the test of time and he featured very talented artists. The album was produced, mixed and mastered by the best in the music industry.

“Bem” off the album is a hit. It has a rich official video. The song premiered live on Big Brother. 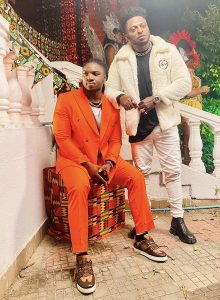 Od Woods and Atela keep a very good relationship in the music industry which is helping in skyrocketing their music careers to greater heights respectively. Atela featured on two songs(Today and Overdose) from the Ikonic album. We are glad Od Woods is set to release “Today” video which is one of the fan’s favorites from the album.