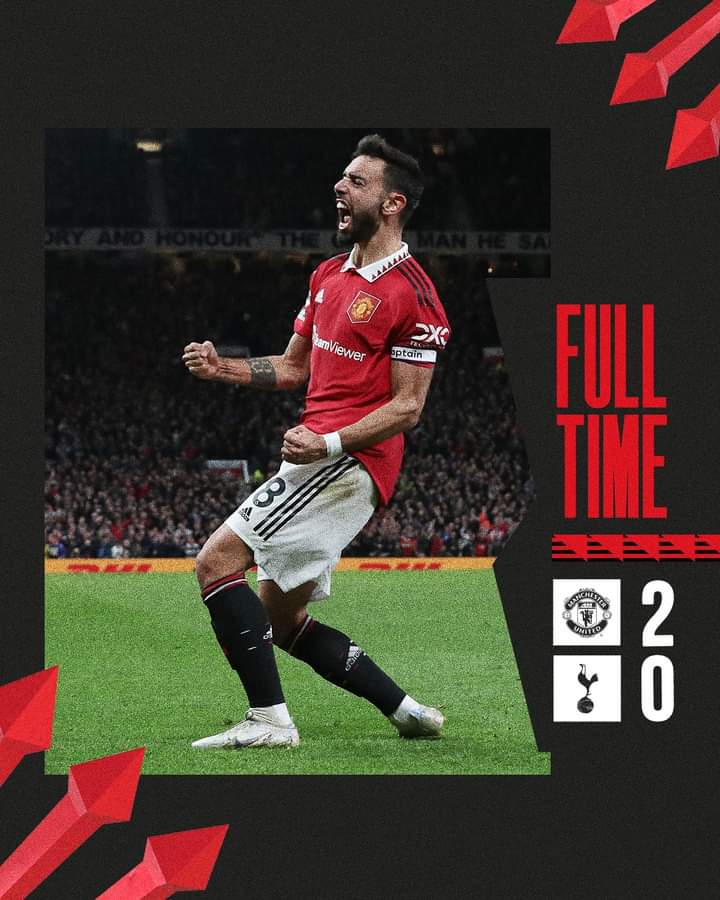 Match report and highlights as second-half goals from Fred and Bruno Fernandes confirmed Manchester United’s dominance as they were too good for Tottenham at Old Trafford; the result keeps United fifth in the Premier League as Spurs stay third; Cristiano Ronaldo heads down tunnel early.

Fred’s opener was deflected in off Ben Davies early in the second half before Bruno Fernandes added a second as shots rained in on the Tottenham goal. This was surely the best performance by United since Erik ten Hag arrived at the club in the summer.

Antonio Conte’s side needed only a point to move above Manchester City into second but they were outplayed for much of the game. Indeed, Spurs had captain Hugo Lloris to thank for staying in it as long as they did – and then keeping the score down.

While the result means Spurs stay third and United retain fifth spot ahead of Newcastle, the trajectory of the two teams feels rather different after such a convincing display. Even if Cristiano Ronaldo did not feel a part of it. The 37-year-old walked off down the tunnel late in the game having not been brought on as a substitute.

Player of the match: Fred. 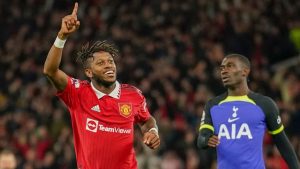 How Man Utd took the game to Tottenham.

Tottenham’s plan for the game was obvious before a ball was kicked. “We will have to be good and creative to find gaps against Conte’s way of playing,” said Ten Hag, “because he is good at protecting his goal while attacking the other way.”

United found those gaps plenty of times in the opening 45 minutes. Antony struck the foot of the far post, while Lloris was forced into smart saves to deny Marcus Rashford, Bruno Fernandes, Fred and Luke Shaw. Rashford really should have beaten him.

Though some of the other efforts were from longer range, United’s total of 19 shots in the first half was the most by any team in a Premier League game so far this season. It was the most that United have managed in over a decade – since the days of Sir Alex Ferguson.

Erik ten Hag made one change to the Manchester United team that was held at home to Newcastle, bringing in Marcus Rashford for Cristiano Ronaldo and therefore going with the team that finished that game.

Antonio Conte did something similar, making one change to the starting line-up from the win over Everton as Yves Bissouma came in for the injured Richarlison – just as he had done in helping to turn that game Tottenham’s way in the second half.

In the end, it took a deflection to beat Lloris. Fred had looked lively from the start – it was his clever pass that put Rashford through – and his performance deserved that moment of luck. Davies’ touch finally left the France goalkeeper helpless, rooted to the spot.

What might worry Spurs supporters is that the flow of the game did not change thereafter, United instead pushing for a second. They found it on the counter-attack when Fernandes expertly curled the ball into the corner of the net from the edge of the penalty box.

Conte has picked up points this season – but not many against their rivals. Well beaten by Arsenal and fortunate to escape with a draw at Chelsea, they were second best here too. It took another stunning stop from Lloris to prevent Rashford from making it three.

For Ten Hag and his team, the opposite holds true. Spurs have now gone the same way as Liverpool and Arsenal at Old Trafford. If they can find a way to defeat the lesser sides too then expect them to rise further. This result will only boost belief in that happening.

Asked about Ronaldo’s decision to walk down the tunnel before the full-time whistle, Ten Hag said: “I don’t pay attention to that, I will deal with that tomorrow. I want to keep the focus on the team.

Cristiano Ronaldo walked down the Old Trafford tunnel before the full-time whistle was blown in Manchester United’s win over Tottenham.

“It was magnificent from all 11 players. I have to correct myself. It was also a performance from the substitutes who came on. Once again, it was a squad performance. I think what we have seen is 11 players who defend and 11 who attack. I was pleased.”

The Dutchman also explained the decision to select Rashford ahead of the 37-year-old forward, pointing to the intensity of the England international’s pressing.

“Against this Tottenham, you need good pressing, good counter-pressing, from there you can create chances. So you need good pressing players. Offensive wise you need that dynamic. That is what Marcus brings. We saw that from the last 20 minutes against Newcastle, when it changed the game and all the players got the benefit of it.”

Man Utd reaching end of the road with Ronaldo?

Cristiano Ronaldo has a habit of grabbing the headlines, but not even his sulking departure could detract from another encouraging stride in the right direction taken by Erik ten Hag’s players.

Ronaldo, an unused substitute, was unhappy with the watching brief he was handed as goals from Fred and Bruno Fernandes earned a deserved 2-0 victory over Tottenham, but when United perform to such a high level his frustrations are baseless.

From start to finish, United took a poor Spurs side to task, demonstrating their continued adaptation to Ten Hag’s methods with an attacking display as comprehensive as any seen at Old Trafford in memory, let alone since the Dutchman took charge.

United’s 28 attempts on goal was the most by any side in a Premier League match this season, the most Antonio Conte had ever conceded in his top-flight managerial career, and had it not been for the heroics of Hugo Lloris, the scoreline would have been just as emphatic.

With Ronaldo on the bench against Liverpool, Arsenal and now Spurs, games United have won with increasing proficiency, it’s clear the club’s transition to life without him is already underway. His petulance will only speed that up.

Conte: ‘When the level is high we struggle’

“You can lose this type of game but at the same time we have to show much more,” said Conte afterwards. “I think we can do much more than today. We have to be honest and say United deserved to win, they started well and created chances to score. Instead, on our side, we didn’t start the game. It was really difficult also because we made a lot of simple mistakes.

“I have to be honest, this was not the first time for us this season. The table is good but every time we play a high-level game we struggle. Against Chelsea we drew, but we have to be honest. Against Arsenal we lost. Today against United we lost. For sure, when the level is high we are going to struggle. This means we have to continue to work to improve.

Manchester United manager Erik ten Hag has won both of his Premier League home games against teams starting the day in the top three of the table, beating Arsenal last month and now Spurs. This is as many home wins against sides in the top three as Ole Gunnar Solskjær and Ralf Rangnick managed between them in the competition.

Manchester United had 28 shots in this match; the most by a team in a Premier League match this season. Indeed, it was also the most that a team managed by Antonio Conte has faced in a top-flight game, in what was the 318th league match he has taken charge of between Serie A and the Premier League.

Bruno Fernandes created nine chances for a Manchester United teammate; the most by a player in a Premier League match this season, and most overall in the competition since Fernandes himself in September 2021 (10 v Aston Villa). Indeed, this was as many shots as Spurs managed as a team in this game (9).

Spurs striker Harry Kane has failed to score in 13 of his 17 appearances against Manchester United in the Premier League, more than against any other opponent in the competition.