International Hypeman Kekes started the year 2023 in grand style. He was honored an award as the “Best and Most Valued Hypeman Gwer East 2022“.

International Hypeman Kekes with real name Asange Aondona Victor started entertainment at a very tender age. His love and passion for entertainment have continued to grow stronger as time goes on. He has traveled far and wide and his talent has introduced him to so many celebrities and different people around the country. He is unique, energetic and a goal-getter. 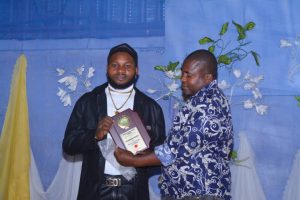 International Hypeman Kekes started his career right from primary school where he became popular among his peers. His love for entertainment started right from childhood and he has not relented. He started right from primary school where he used to act drama mostly playing a role of a comedian even in secondary school. After graduating from Secondary school in 2014, he participated in a talent hunt show organized by Zulezoo and after performing there, he won the best Comedian. From there, he picked up courage and he went into the industry but he was more of an MC then.

National Association of Masev students found his hard work worthy of recognition and they honoured him an award as Best and Most Valued Hypeman Gwer East in 2022.