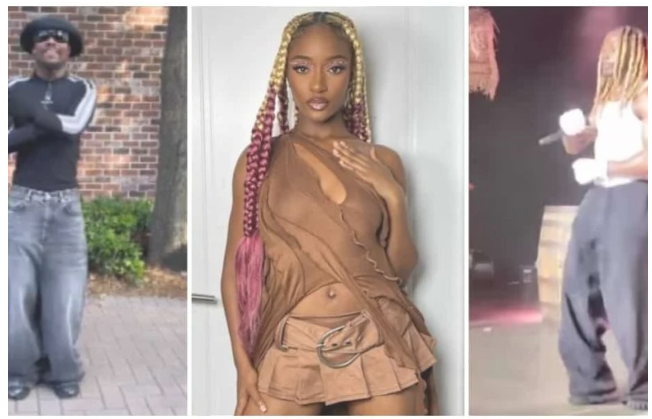 Perhaps, a bid to spice up the new year with some hilarious comments already, a netizen flips his whip towards the Nigerian songstress Ayra Starr saying Asake’s baggy trousers can make 45 skirts for Ayra Starr.

Ayra Starr is a Nigerian singer and songwriter signed to the Mavins Record label owned by Don Jazzy. She is known for her fashion choices as well as her unique music style and unequivocal vocals. But her taste for revealing dresses, especially mini skirts has continued to make headlines.

On the other hand, Asake, the Rave of the moment has been giving hits back-to-back. He has won the love of many music lovers across the world and has grown huge followership therewith. One thing is, many people can’t help but notice his eccentric sense of fashion style.

The singer is known for his love of baggy pants. If he’s not in floor-length oversized denim pants, he is rocking plain-coloured pants.

Twitter user, @MkoBlackDiamond, posted a photo of the singer from one of his concerts and in the photo, Asake is seen dressed in a white single and black baggy pants.

However, Sharing the photo, the tweep hilariously captioned:

“Ayra Starr fit use this Asake trousers sew like 45 skirts.”

Rawnigeria adds that, “when she is thrilling fans with new hit songs, she is triggering critics with photos of herself in micro-mini skirts.”

Also Read: How Yorubas are dominating the Nigerian music industry