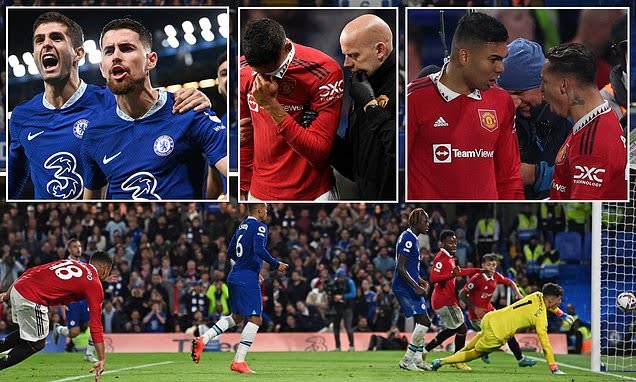 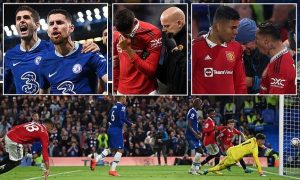 It had seemed in the dying moments of this game that the narrative would revolve around missed chances and that, most of all, it would revolve around The Man Who Wasn’t There. Manchester United had missed a series of chances and had just gone a goal behind to a Chelsea penalty. The aggrieved fans of Cristiano Ronaldo, banished from the squad for his petulance, were queuing up to say how much he had been missed.

But United deserved better than that. They had dominated swathes of this game and had looked more coherent and more accomplished than they ever have with Ronaldo in the side in his second coming at Old Trafford. Casemiro and Bruno Fernandes had been the best players on the pitch for much of the match. It did not feel right they should be on the losing side.

United refused to give up. It is tempting to think that Erik Ten Hag must be given much of the credit for that, for building a sense of togetherness and collectivism at United that has not existed for some time, for banishing the individualism, for restoring team spirit. So United kept pressing and finally, as time was running out, Casemiro, the man of the match, rose highest in the box to loop a header over Kepa Arrizabalaga and in off the far post.

It was a creditable point for United against a Chelsea team still unbeaten under Graham Potter, an enthralling battle between two bright, clever coaches and teams who appear to have been reinvigorated by them. They are locked together in fourth and fifth places, with Chelsea a point ahead. Both look like sides who will press hard for the top four and elevate their ambitions next season. 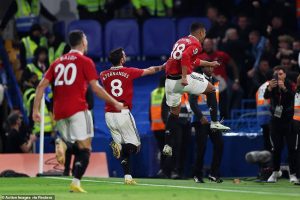 Both teams started brightly. Luke Shaw whistled a shot just wide, an Antony curler was well saved by Kepa Arrizabalaga and United were grateful to a fine sliding interception from Raphael Varane that snuffed out the danger posed by a fizzing cross from the Chelsea right. Bruno Fernandes worked hard to find space between the lines and picked and probed at the Chelsea back line.

United dominated possession and Chelsea found it hard to get out of their own half. When they did, their attacks quickly fizzled out. United found it hard to make their pressure pay though and it was not until nearly half an hour had elapsed that Fernandes played Marcus Rashford in on goal and Kepa rushed out to smother his shot.

Rashford threatened again a few minutes later. He collected the ball just inside the Chelsea half, ran at the retreating Thiago Silva and unleashed a dipping right foot shot that Kepa dived to his right to push out. Casemiro, starting ahead of Fred and Scott McTominay, was playing superbly in the midfield anchor role and controlling the heart of the contest.

Ten minutes before half time, Graham Potter decided he had seen enough of his side struggling to get a foothold in the game and made a change. He took off Marc Cucurella and replaced him with Mateo Kovacic to try to redress the balance in midfield. Almost immediately, Chelsea forced their way back into the match.

Pierre-Emerick Aubameyang prodded a shot wide a few minutes before half time and Chelsea squandered another chance soon afterwards when Raheem Sterling failed to control the ball on the edge of the United area and played a difficult pass to Aubameyang, who could not control it, and the chance went begging.

The best chance of the half was still to come. It fell to United on the stroke of the interval. Lisandro Martinez won a brave header inside the United half and it fell to Fernandes. Fernandes slid a precise pass into the path of Antony but with only Kepa to beat, Antony sliced his shot agonisingly wide of the goalkeeper’s left hand upright.

The game was more even after the break. Aubameyang skipped past Varane on the United right early in the half and crossed deep for Sterling, who tried to lay the ball back for Mason Mount but left it shot. Varane injured himself trying to tackle Aubameyang and seemed to hyper-extend his knee.

The France international looked distraught as he was led down the touchline. Chelsea fans booed him and mocked him and were delighted when he gestured at them in response. Varane was consoled by Ten Hag when he reached the United bench and then disappeared down the tunnel. Like so many other players who have suffered ill-fortune recently, he will be worried about his chances of making the World Cup next month.

The France international looked distraught as he was led down the touchline. Chelsea fans booed him and mocked him and were delighted when he gestured at them in response. Varane was consoled by Ten Hag when he reached the United bench and then disappeared down the tunnel. Like so many other players who have suffered ill-fortune recently, he will be worried about his chances of making the World Cup next month.

Instead, it was left to a Chelsea substitute to play a crucial part in the outcome of the game. When Ben Chilwell swung over another Chelsea corner from the left, McTominay, a second half substitute, wrestled with Armando Broja. He had both arms round his waist when Broja fell to the floor and Mr Attwell pointed to the spot.

It was hard to disagree with the penalty in isolation. The objection, of course, is that incidents like that happen in every game and often go unpunished. United’s players, predictably, were apoplectic. Fernandes, predictably, led the protests. Fred was booked. As Jorginho waited to take the penalty, Fernandes whispered long and earnestly in De Gea’s ear, presumably giving him tips on where Jorginho would place his kick.

But it was not over. Deep into added time, United pumped a ball into the area and Casemiro and McTominay rose to meet it together. Casemiro got to it first and his header looped across goal towards the far post. Kepa dived to try to save it and got a despairing hand to it. His touch diverted the ball on to the post but when it bounced down, replays showed it had just crossed the line.

The United fans gathered there at the Shed End roared and danced and for a few moments at least, no one thought about The Man Who Wasn’t There.