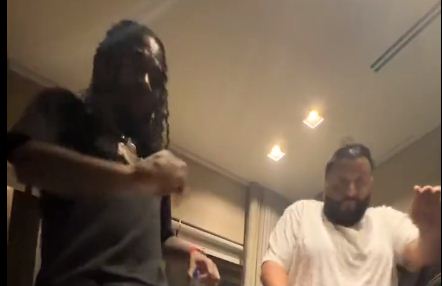 Burna Boy is here Teaching DJ Khaled how to dance Nigerian steps in the studio.

Famous Nigerian singer Burna Boy is touring the world and meeting with global celebrities. The common person crooner has been making Nigerians very proud. Burna Boy is currently one of the best lyricist and stage performers from Africa. The self acclaimed African giant is living up to the standards of his name. Damini Ebunoluwa Ogulu MFR (born 2 July 1991), known professionally as Burna Boy, is a Nigerian singer, songwriter and record producer. He rose to stardom in 2012 after releasing “Like to Party”, the lead single from his debut studio album, L.I.F.E (2013). In 2017, Burna Boy signed with Bad Habit/Atlantic Records in the United States and Warner Music Group internationally. His third studio album, Outside, marked his major-label debut. In 2019, he won Best International Act at the 2019 BET Awards, and was announced as an Apple Music Up Next artist. His fourth studio album, African Giant, was released in July 2019 and won Album of the Year at the 2019 All Africa Music Awards and was nominated for a Best World Music Album at the 62nd Annual Grammy Awards. He was awarded the African Artist of the year at the 2020 VGMA’s. Burna Boy released his fifth studio album, Twice as Tall, in August 2020, which was nominated for the same category at the 63rd Annual Grammy Awards, making him the first Nigerian artist with back-to-back nominations at the Grammys. In 2021, Twice as Tall won the Best World Music Album at the 63rd Annual Grammy Awards. In July 2022, Burna Boy released his sixth studio album, Love, Damini which also became the highest debut of an African album on Billboard, Netherlands, the United Kingdom and France. In October, Burna Boy was given the award of Member of the Order of the Federal Republic for his achievements in music.

Burna Boy was in the studio teaching Dj Khaled how to dance. Watch the video below: