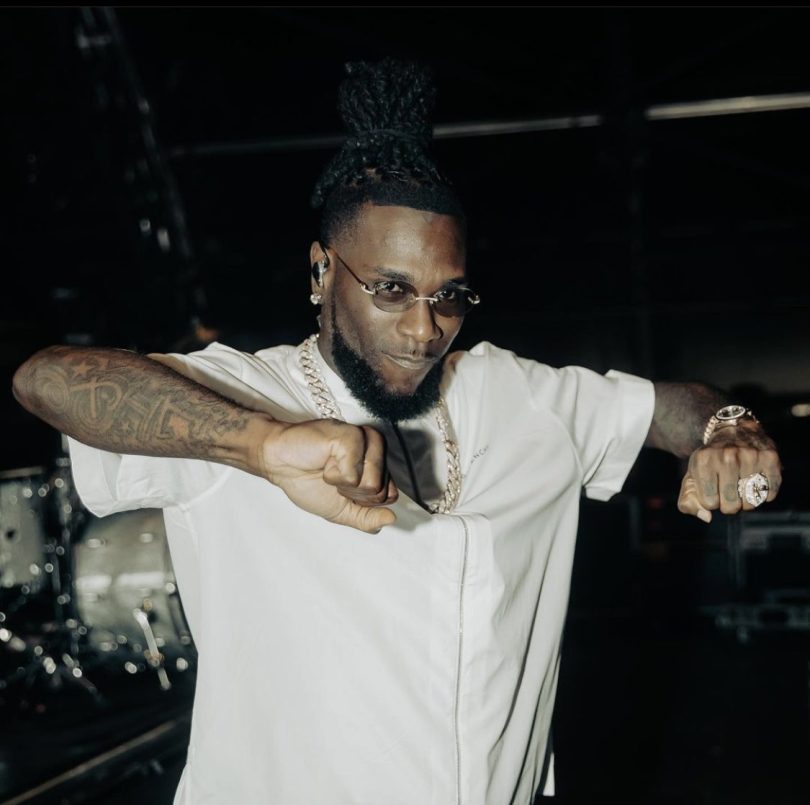 Yet again, after raining abuses on fans at his latest Lagos Concert on Sunday night, Nigerian Afrobeats, Afro-fusion singer, Burna Boy justifies Lateness to his own concert while promising to never perform in Lagos again.

The singer via an Instagram story apologized to his Lagos fans for the disappointment at his last concert but held high his vow to never perform in Lagos again despite his love for his fans.

Burna Boy purportedly explained that his reasons were genuine thus, stating that the organisational and infrastructural structure he needs isn’t available.

He however disclosed that he is planning to build a world class infrastructure and is open to work with investors and stakeholders to bring his vision to life.

“Lagos, I love you but I can’t do this again. The organisational structure and infrastructure is not there for the complexities of my audio and Production needs.

“Let’s be clear. I wasn’t late, my band wasn’t late. We pride ourselves on being highly professional especially with our stage craft.

“There were three options available to me; wait for audio to be fixed and delay the show, come out at 11pm as planned with no sound or call breach of contract and pull the plug.

“I know I can’t go all over the world and neglect my own people so I’m taking matters into my own hands! I’m gathering the troops to work on building world class infrastructure in the Nigerian entertainment business.

Investors and stakeholders, interested pls hit me up, we need to make some changes.

I apologize to my fans for how hectic it was, thank you for staying and watching the storm with me.

I commend my band for making lemonade with the worst lemons we’ve ever seen…..” He wrote. 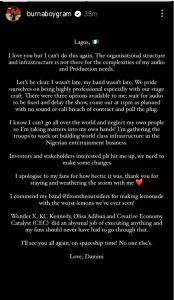 Recall that Burna Boy’s concert which took place on Sunday night commenced at about 3am as against a 7pm schedule, thus keeping fans waiting for eight hours.

In a viral video, the latecomer reportedly had no remorse for his actions as he went on to accuse fans of making derogatory comments against him.

Burna Boy claimed that his concerts’ attendees had accused him of killing someone and that his mother used to be a dancer for the legendary Fela.

He also stated that he would have gone home if it hadn’t been for the pleas of his fellow singer, Seyi Vibes. [Watch video here]

Kindly share your thoughts with us in the comments section.