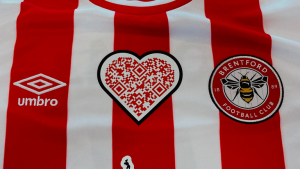 Brentford will sport a heart-shaped QR code on their shirts against Chelsea to raise awareness about learning resuscitation skills.

A heart-shaped ‘CPQR code’ will feature prominently on the front of the Bees’ shirts for the clash on Wednesday night, to “encourage millions watching around the world to take two minutes to learn the basics of CPR”.

The code will also feature on screens around the Gtech Community Stadium, on the club’s digital platforms, and on the cover of the matchday programme.

CPR demonstrations will also take place around the stadium on the night.

In addition to this, Brentford first-team players Mads Roerslev and Keane Lewis-Potter featured in their own instructional video which will be published on social media.

It forms part of this year’s Restart a Heart campaign and the club’s new partnership – ‘the Heart of West London’ – with a number of leading charities to improve heart health in the local community.

Brentford chief executive, Jon Varney, said: “Cardiac health is an issue that is very important to us and to our local community. By putting the heart-shaped ‘CPQR code’ front and centre on our shirts for this match, we are able to use our platform to help teach the basics of CPR. 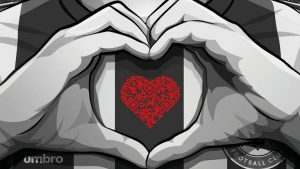 “We are urging our fans and those watching to take two minutes to learn the basic skills that could be the difference between a friend or family member surviving a cardiac arrest.”

There are more than 30,000 out-of-hospital cardiac arrests in the UK every year, and every minute without CPR and defibrillation reduces the chance of survival by 10 per cent. Recent research carried out by OnePoll found that 74 per cent of people have learned how to perform CPR – but only 44 per cent feel confident in performing it if someone was in a life-threatening situation.

Robert Rowan speaking at the SFA Convention in 2016

Brentford have also taken the step of naming their new training facility after their late former technical director Robert Rowan.

It will be officially named the Robert Rowan Performance Centre as part of the club’s tributes to his memory and formally opened by his family in an official ceremony later this year. Rowan suffered a fatal cardiomyopathy episode in the early hours of November 12 in 2018, and died at the age of 28.

The centre is being built on the site of Brentford’s current training ground at Jersey Road and will be in place for five years.

Chairman Cliff Crown said: “It is an honour for us to be able to name our new performance centre after Robert. He was a young man who made a big impact on Brentford.

“His ideas, his personality and his drive all made a lasting impression before his life was sadly cut short. This will be a lasting legacy for Robert, for his wife Suzanne and for his family.”

Chris Rowan, Robert’s father, said: “I sit and watch all of Brentford’s games on TV with a picture of Robert beside me, both of us cheering them on. To hear that their new performance centre will carry Robert’s name fills me and all of our family with so much pride.”

Brentford head coach Thomas Frank has described reports of a new contract as rumours but reiterates he is very happy at the club.

Brentford’s fine start to the season – they currently sit in ninth place, level on points with Liverpool – has prompted speculation that head coach Thomas Frank could be a target for other clubs.

There were reports claiming he is in talks over a new contract, but the 49-year-old Dane said no discussions have taken place.

“There’s a lot of rumours out there,” he added.

“One thing that is for sure is that I’m very happy at Brentford. There are a lot of things to achieve, I’m very ambitious on behalf of the club.

“But I have a contract running until 2025, that’s it, and let’s see what happens in the future. We are focusing on the Chelsea game tomorrow.”