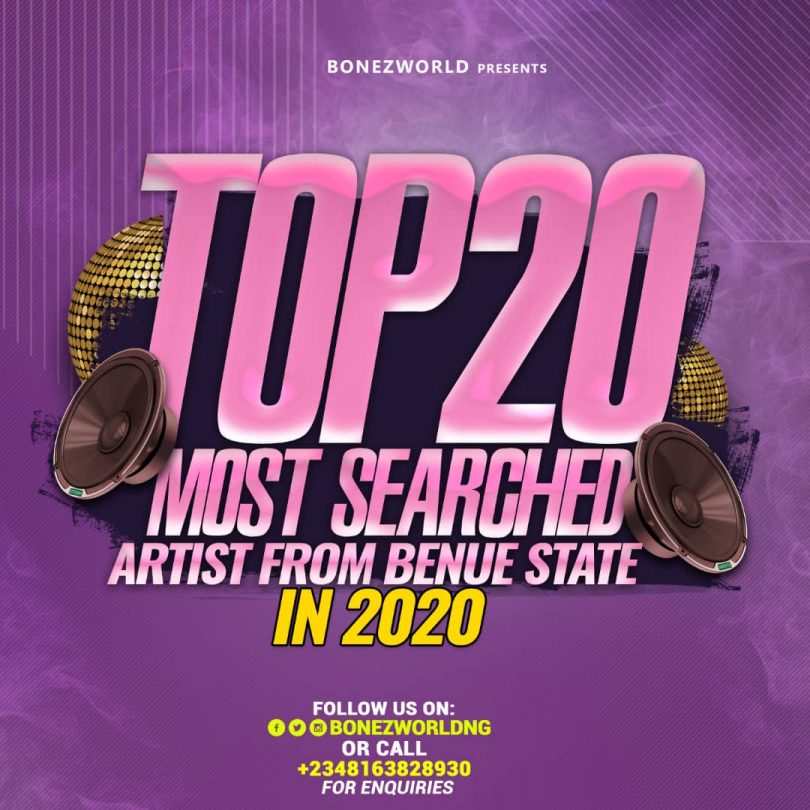 Top 20 Most searched artist from Benue state in 2020 presented by Bonezworld.

The year 2020 was filled with so many activities ranging from Corona Virus lockdown in the fast rising Benue entertainment industry.

Artist from Benue state are beginning to pick up the challenge of projecting their brands for the world to see and they are currently ready to take their rightful spots in the music industry.

Benue state is blessed with a lot of talents ranging from different genres and we are going to use this opportunity to give accolades to these artist.

This list is strictly based on Statistics extracted from Bonezworld.com.

The artist that have been selected include: 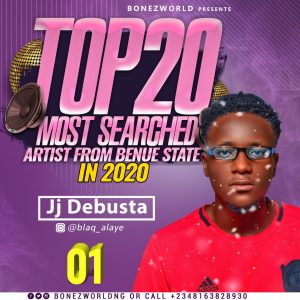 He has so many videos to his credit. 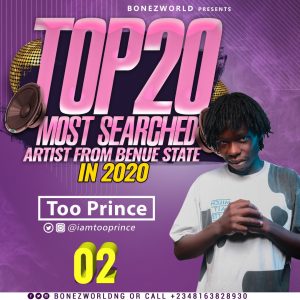 2. Too Prince: His real name is Aker David Fanen popularly known as “Too prince”. He is a fast rising rapper from Benue that is currently holding it down. His fan base is so strong that his fans can not get enough of the rapper. He has released songs like Va Kyua, Kung Fu featuring Slikish and Yung Bizo, Shimakwe and so many more too numerous to mention. His latest song titled Pepe featuring Rekay was an instant hit in Benue state and different parts of the east in Nigeria. 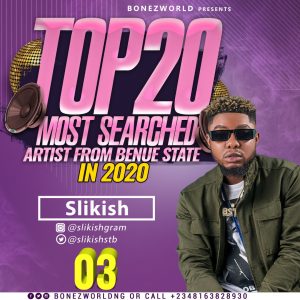 Slikish has so many high quality videos to his credit. 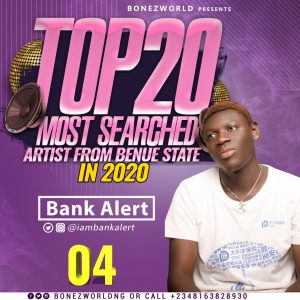 4. Bank Alert: He is a very talented award winning versatile artist who have proven to never give up on his dream of becoming a super star. He recently graduated. Don Jazzy recently followed him on Instagram which went viral. He has released songs like Don Jazzy Connect, Bet9ja ft Koboko and Ice Daddy, Back To Sender and so many more too Numerous to mention. 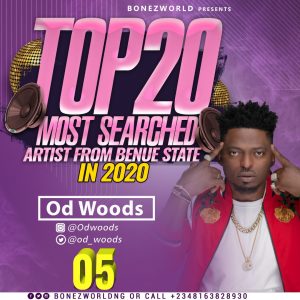 5. Od Woods: He is an award winning artist who broke into the music industry with his hit song titled “Go Below“. His real name is Orduen Andrew Ikon. He is a talented music artist with a large fan base scattered on the streets and on social media. He is currently one of the biggest music exports from Benue state and he is an artist to reckon with in the entertainment industry. He is also the founder, convener and headliner of Made in Benue all White Party which is an annual event held in Makurdi, the Benue State capital to celebrate the people, culture and heritage of the state. He has worked with artist like Ice Prince, Davido, Vector, Rapizo, Lady Pesh, Noobvee and so many more too Numerous to mention. 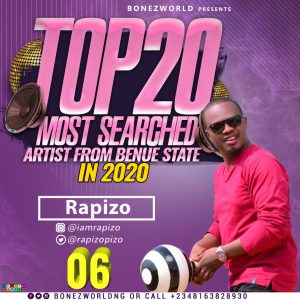 6. Rapizo with real name Nyam Luke Lubem is a very talented popular singer, song writer, dancer and a performer from Benue state of Nigeria. He started music at the age of 12. His prolific musical prowess has gained him fame and recognition worldwide.

His style of music is quite unique as he combines Folk, Afro pop and Rnb which gives him an outstanding soothing flavour. He has released songs like Patience featuring Bravo D and Shedrach, Tsav, Tar Wase, Immortal Rapizo, Too Far Away, Corona Virus and so many more too Numerous to mention. 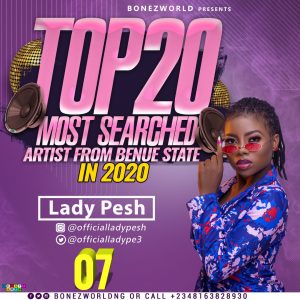 7. Lady Pesh: Her real name is Oryina patience. She was born on the 15th of January. She is a Nigerian singer, song writer and a performer born and brought up in Benue state. She began her music career in 2013 and in 2014, she was nominated for the best female rising artist of the year (2014).
After winning and receiving the award as an artist, she was motivated to take her music career more seriously with the fact that there where people who loved and supported her. She has released numerous songs like: Dora, Life and so many more too Numerous to mention. She has worked with the likes of Od Woods, Rapizo, Aj Natives, B33is and so many more too Numerous to mention. 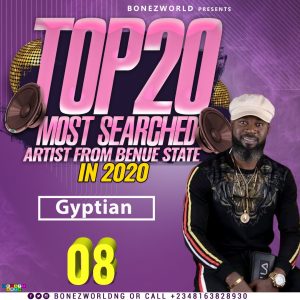 Egyptian Cairo aka Bet9ja Ambassador is one artist that keeps popping up on our search records. He has a fan base scattered in different parts of the country. He has released songs like Junior, Bet9ja, Corona Virus and so many more too Numerous to mention. 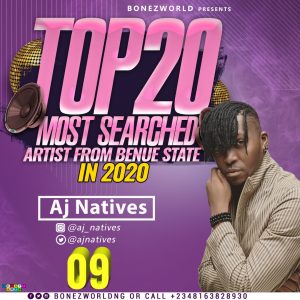 9. AJ Natives: Agon John popularly known as Aj Natives is an african contemporary/Afro beat Artiste. The Nigerian Born song Writer/Composer/Vocalist and musical Performing artist was a Member of the now defunct group “Da Natives” who featured with 2baba on the Song “Keep on Rocking” ,a hit track on 2baba’s solo Debut Album titled “Grass2Grace”. Aj Natives also had success with Da Natives on their self titled album titled “We Be Da Natives”, an Album that had successful singles such as “Shain pepe”, “Draw Nearer”, “African Rythm” and “Sweet pass”. As a song writter, Aj Natives has written and Co writen for Music icons which include Innocent Idibia aka 2Baba, Black Face ,Faze and Kween Enokola just to mention a few. He was Recently featured on the Song titled “if No Be You” ,a track on 2baba’s recent Album titled
Warriors” ,a track he Also Co wrote on the Album. Aj Natives have released songs Like: Stronger and Wiser, Supa Star and so many more too Numerous to mention. 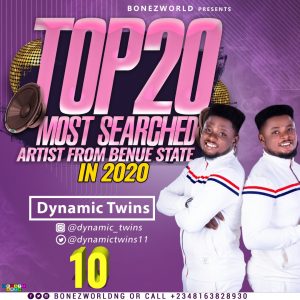 10. Dynamic Twins: Emmanuel and Peter Popularly called Dynamic Twins are Identical talented Nigerian gospel singers currently known for releasing hit songs. They are 2nd to the last children out of a family of 10.

Among the songs they have released include: 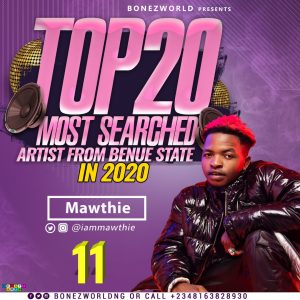 11. Mawthie: His real name is Edward Ungwanen Wealth. He is currently signed to Lexa Records. Mawthie became an internet sensation with covers to songs he did of popular Nigerian songs with great support from music producer, graphic designer and video director, Kindwiz. Mawthie was noticed by Owen Jeffery Igbinovia, the CEO of Lexa Records. Mawthie has released songs like Normally, Won Kere Si and so many more too Numerous to mention. 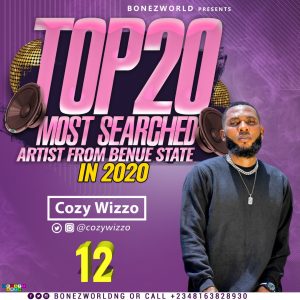 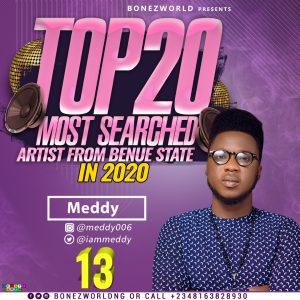 13. Meddy: His real name is Olotu Emmanuel. He is a very talented versatile rapper who has been on the Benue map for years. He has won so many awards and he is not relenting anytime soon. He has worked with the likes of Cozy on a song titled Otukpo Na Our Lagos which was an instant hit. 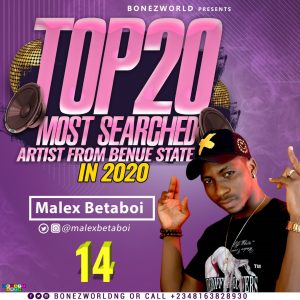 14. Malex Betaboi with real name Sughnen publisher Donald and also known as the middle belt sender Mr Mba a nen kwagh ga. He is the last and only male child from Mr and Mrs Donald. He was born in Aliade, Benue state from a God fearing family. Right from infancy, Malex Betaboi was seriously good in architecture like drawing. He was also good in Dancing. In 2015, Malex Betaboi became a fast rising musical name in Aliade with his brand named Betterboi mission worldwide and he became a well sort after artist in Gwer East in 2016. He took his first big music move by moving to Abuja and some parts of Nigeria and he finally later moved to Lagos State Nigeria where he currently resides. Malex Betaboi has done major collaborations with some Super stars like Magnito and Dr Smith. Malex Betaboi is recognized as one Benue talented Star. Just after his debut album tilted *FARAWAY*, he came out with a powerful follow up single featuring *Rapizo* who is one of a Benue household name and the song was titled “Take you” which was a hit that got Everyone talking. 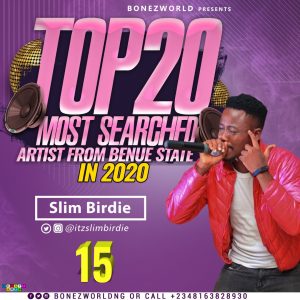 15: Slim Birdie with real name Vambeh Tersoo Stephen is a very talented versatile artist. He is an award winning artist with a very bright future in the entertainment industry. He has released songs like Why, Me & You, can’t, Surprise, Doo and so many more too Numerous to mention. 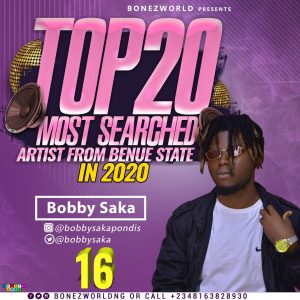 16. Bobby Saka: His real name is Saka Kingsley. He is a very talented versatile artist that have been through ups and downs in the entertainment industry. He has released numerous songs that became instant hit songs and he is currently one of the most supported artists by the Deejays around Middle belt. He has released songs like: Akonuche, Come Thu, Pamper and so many more too Numerous to mention. 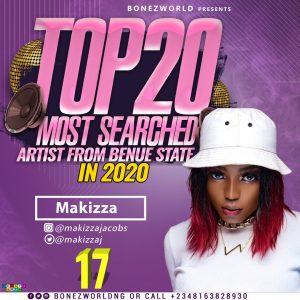 17. Makizza: Her real name is Gift Jacobs. She is a very controversial artist that stands out among the female artist in the state because she is very hard working and consistent. She has released songs like: Energy, No Lies, Already featuring President EMS and so many more too Numerous to mention. 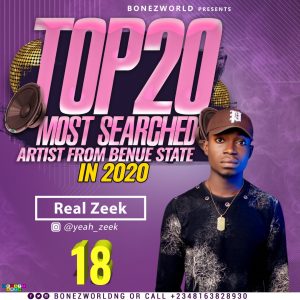 18. Zeek: Zeek who is an outstanding talented rapper with real name Isaac Orngu Agah. He became the talk and topic on social media since he released his hit song titled “Next Big Thing“. Heavy weights in the entertainment industry are shocked because he took the industry by surprise. He is a talented lyricist and his pen game is top notch. He is one step away from greatness if he continues with the same energy he started with. He has released songs like Next Big thing, Money Minded, Kung Fu (Freestyle), Story Story Part 1 and Low Key ft Jayknows. 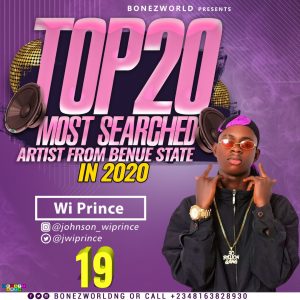 19. Wi Prince: His real name is Johnson Peter Terngu. He came into the music industry not too long ago but his hard work and consistency has made him to be named among legends in the industry. He is very young but he has two official videos to his credit. He has released songs like: Kelewa, Only you and Super. 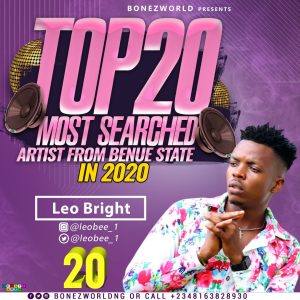 20. Leo Bright: Leonard Nomshan who goes by the stage name Leo Bright is a Nigerian singer, rapper, and song writer.

He is also an executive chef who hails from Benue State. Leonard was born in Makurdi, the capital city of Benue state in the late 90s. He currently resides in Lagos, Nigeria where he has lived for the past 8 years.

We want to specially recognize the likes of 2baba, Chris Morgan, Terry G, Zaaki Azzay, Zulezoo, Geoffrey Orji, Monica Ene Ogah and so many more too Numerous to mention putting Benue entertainment on the world map.

Drop your comments and suggestions in the section below.