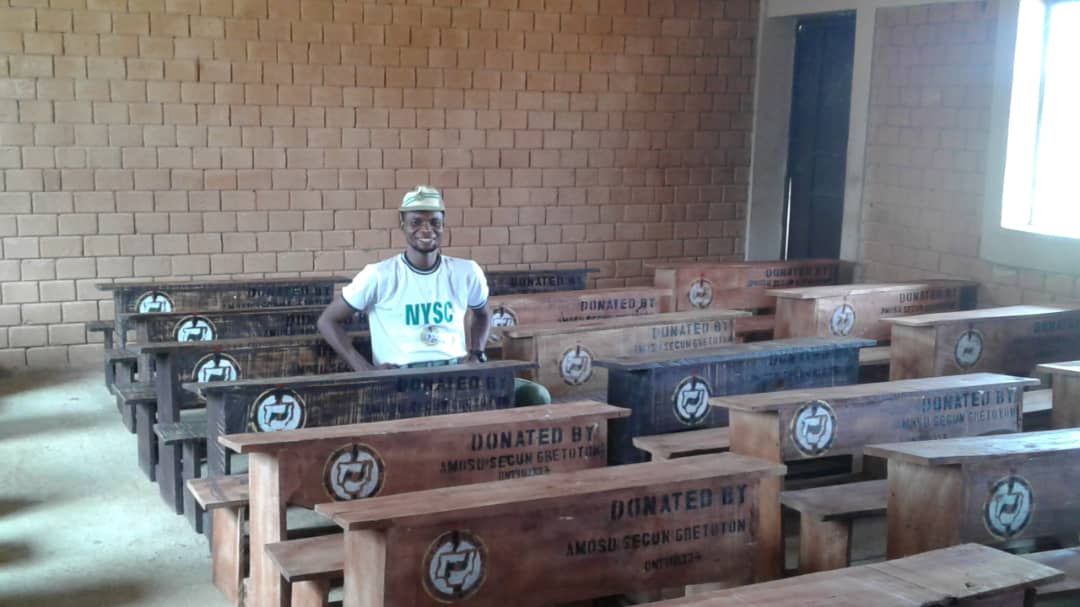 Segun Gbetoyon Amosu popularly known as Psalmist is the type of corper every Nigerian state will desire to have on their land for a compulsory youth service. Psalmist is a corper observing his youth service in Benue State. The indigene of Badagry, Lagos State who read Sociology at the Lagos State University can be described as one of the best corps members to ever grace Benue State.

The said corper did not only donate a total of thirty (30) dual-desks to UBE Junior Secondary School, Owner Occupier Quarters, Makurdi; he is a talented singer who has used his musical skill to promote Benue State, especially the Tiv culture as well as the NYSC through his musical single which he titled “Corper’s Love”. Being a Yoruba, corper Segun won the heart of many people with the way he was able to fluently speak the Tiv language in his song ” Corper’s Love”. The song soon becomes a constant hit on Radio Benue, the station which also found it worthy to grant Corper Segun a live interview in order to recognise and encourage his contributions to the development of Benue State.

Despite the setback metted on the personal CDS of Corper Segun by the outbreak of the COVID 19 pandemic which forcefully brought all activities to a halt, he did not give as his project was finally commissioned by NYSC Benue State on Thursday 21st of May, 2020. In attendance were the Makurdi Zonal Inspector, Mr Oga Moses; Makurdi Local Government Inspector, Mrs Hua Comfort and the Supervisor of the Anti-Corruption CDS which Corper Segun belongs. The officials were very impressed and the landmark achievement.

Mrs Judith Ukase, the Director of Personnel, LGEA, Makurdi also commended the contribution of Corper Segun to the development of education in Benue State. Zaki Johnmark Shingu who is the traditional ruler of the host community asserted that Corper Segun deserves to be retained by the Benue State Government and therefore urged NYSC Benue State to forward his name to Governor Samuel Ortom.

The commissioning came to its peak when “Corper’s Love” by Psalmist (the song of Corper Segun) was played to the hearing of the people in attendance as he was given an ovation and tagged a “special corper”.

When asked how he was able to raise funds for his personal CDS, the musician corper said “the people I contacted were not responding positively. As a Lagosian, I was fortunate to be a beneficiary of the Lagos State Local Scholarship. We were owed our last pay in my final year. Lucky enough, they paid when I was expectantly searching for sponsors. So, I just diverted the scholarship fund into the project. The most important thing is that I have impacted the lives of the children that will use those desks”.